Cryptocurrencies have taken the world by storm over the past few years. The world’s first and largest cryptocurrency, Bitcoin, has seen its value grow from cents in 2009 to an all-time-high of over USD 60,000 in 2021, making multi-millionaires of early crypto investors.

As of 2021, over 106 million people around the world use cryptocurrencies. Yet, despite its incredible popularity, crypto is now being shrouded more and more by the controversies surrounding it. From market crashes to harsh environmental impact, it’s becoming more evident that cryptocurrencies are not the corruption-free tools of trade they were designed to be. To better understand its impacts, Energy Watch breaks down the technology behind cryptocurrencies and the true costs of large-scale crypto-mining.

Cryptocurrencies are a form of currency that exists digitally and is circulated without the need for a central authority such as a bank. These currencies are created and stored electronically on a blockchain, using cryptography (the encryption and decryption of information) to control the creation of monetary units (crypto coins) and to verify transactions. 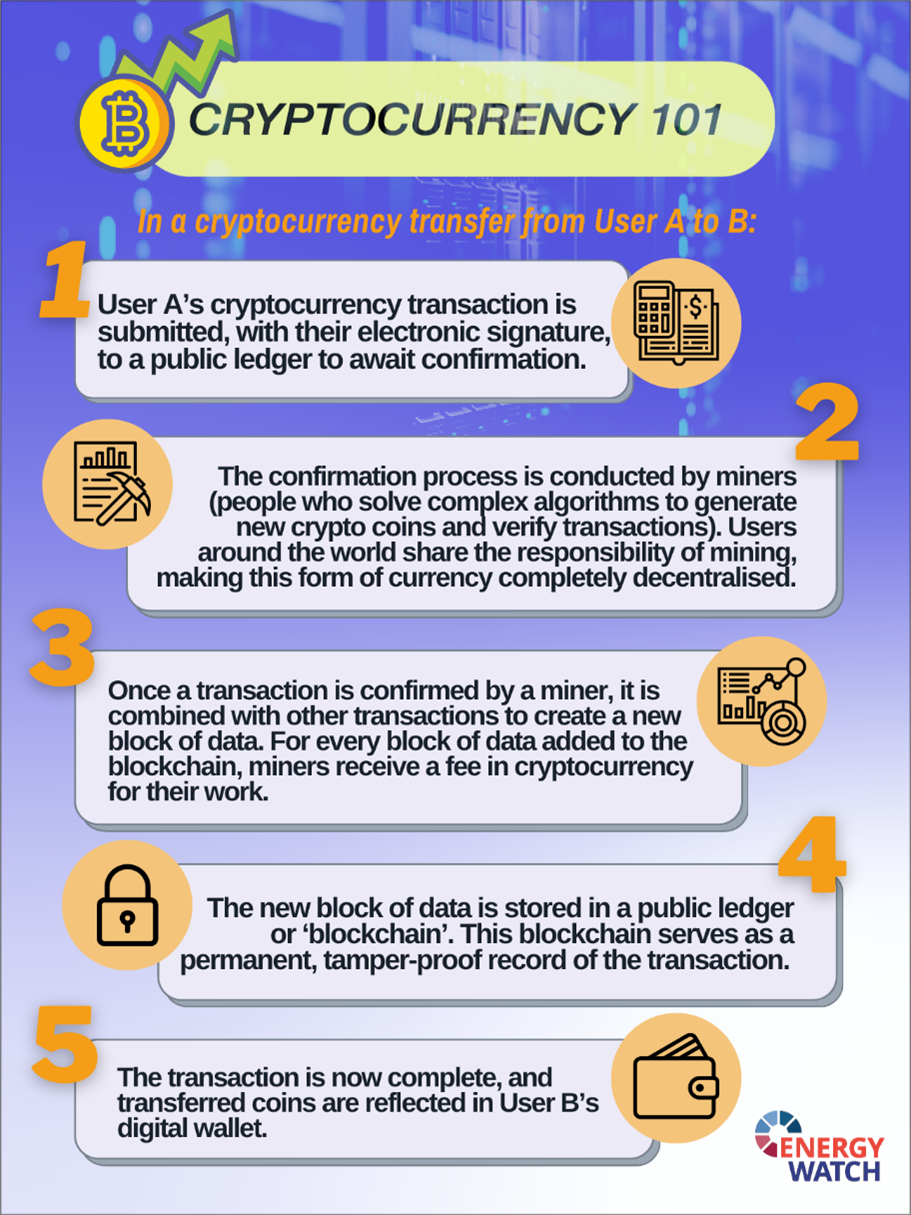 Against traditional currencies and banking, cryptocurrency transactions are secure, anonymous, fast, accessible worldwide, non-reversible, tamper-proof, and decentralised. With the sudden rise of crypto, some major companies such as Amazon, Microsoft and Visa have even begun accepting cryptocurrencies as payment.

The High Costs of Crypto

For all the hype surrounding cryptocurrencies, one major problem has emerged for the real world – crypto’s energy demands. Verifying crypto transactions (and receiving the subsequent fee) requires computers to solve complex math problems. Since each of these problems can only be solved by trial and error of enormous odds, mining computers run constantly to find the solution and be rewarded with their fee.

For all the hype surrounding cryptocurrencies, one major problem has emerged for the real world – crypto’s energy demands.

As the cryptocurrency market becomes even more lucrative, more people are incentivised to become miners. The more the crypto network grows, the more difficult mining algorithms become. With each new block on the blockchain, more and more energy is needed for cryptocurrency mining. These high energy requirements create another problem – energy theft.

To lower the high energy bills from constant crypto mining, some miners have taken to bypassing energy meters to steal electricity to power their mining operations. In Malaysia, electricity theft from illegal crypto mining activities have resulted in an estimated loss of over RM2.3 billion, with over 7,200 cases detected since 2018.

At the same time, high electricity costs have led miners to use more efficient processors called Application-Specific Integrated Circuits (ASICs). However, ASICs are so specialised for this task that as they become obsolete for crypto mining, they cannot be repurposed for any another task or even a different crypto mining algorithm.

Bitcoin mining rigs alone, which have an average lifespan of 1.29 years, produce an estimated 30,700 tonnes of electronic waste every year – “comparable to the small IT equipment waste of a country like the Netherlands.” On the local front, from 2020 to 2021 Malaysia saw a 4,200% exponential increase in seized crypto mining items from illegal operations, with mining items confiscated in 2021 valued at approximately RM54 million.

Who Pays the Price? 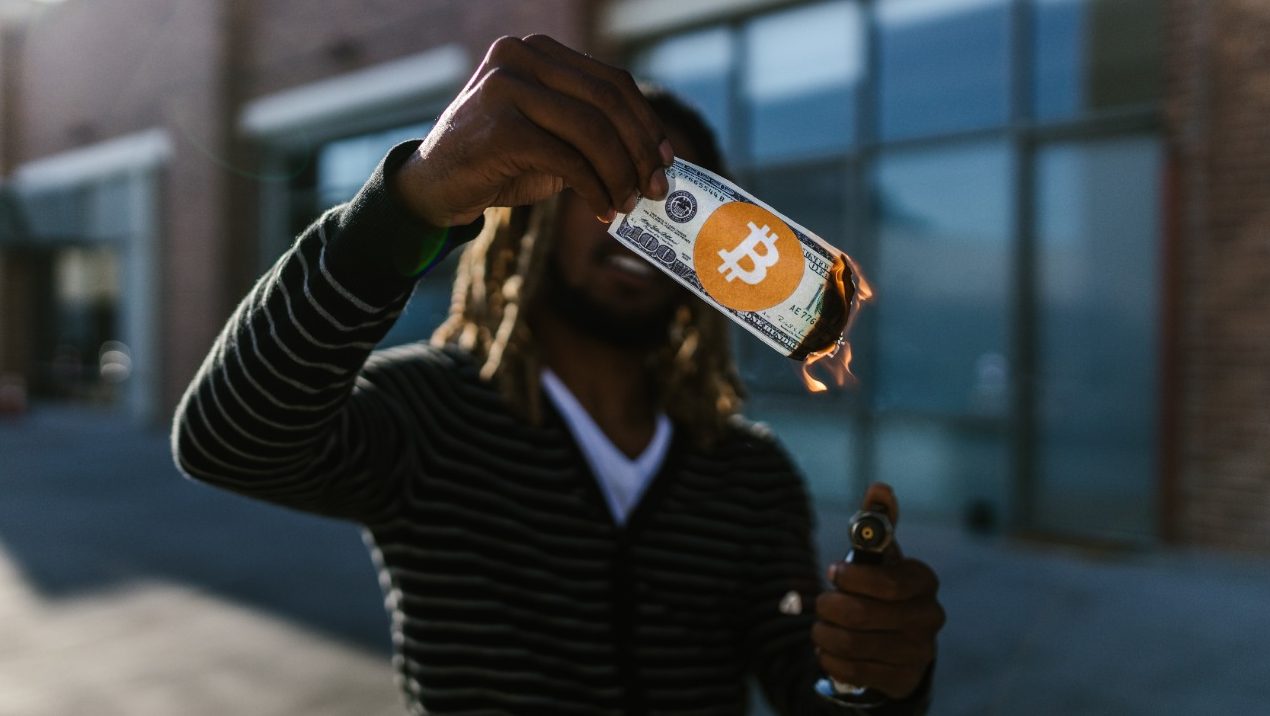 At this point, an estimate by the University of Cambridge says Bitcoin alone uses 150 terawatt-hours (TWh) annually – more than the entire country of Argentina – emitting 65 megatons of carbon dioxide annually. As miners race to build larger, more powerful mining facilities, this thirst for energy is growing. In fact, a study by Nature Climate Change has shown that Bitcoin emissions alone could push global warming above 2°C, placing the success of our global energy transition in great risk.

In the US, retired coal- fired power plant Greenidge Generation was brought back online to cash in on the crypto craze. In 2020, this crypto-mining operation emitted over 220,000 metric tons of carbon dioxide, comparable to adding almost 50,000 new cars on the road. This is just a fraction of what the plant is capable of – at full capacity, Greenidge could emit nearly 1 million metric tons of carbon dioxide.

On top of the harsh environmental impact, the high energy requirements of crypto mining places enormous strain on energy grids. In Texas, USA, the influx of crypto miners seeking to leverage the state’s cheap electricity, low taxes and pro-cryptocurrency policies have caused grid instability, especially during times of surge demand caused by extreme weather events. This year, the state is expected to upgrade its transmission grid at an expected cost of USD 4.5 billion, which will be distributed and borne by all energy consumers.

In Malaysia, illegal mining operations have resulted in energy thefts totaling RM2.3 billion since 2018. Most recently, Sabahan utility SESB raided 16 Bitcoin mining facilities for suspected energy theft. The premises of this mining syndicate, which was reportedly operating since 2021, were equipped with power meters but were not recorded in the SESB system. Losses incurred by the utility are yet to be determined.

Under current regulations, utilities are not able to back bill unregistered miners for energy losses. Instead, these unrecoverable losses are costs which are socialised to other consumers under the Incentive Based Regulation (IBR) mechanism. On top of this, the increased electricity generation required to support 24/7 mining activity increases overall system costs, which can translate into an ICPT surcharge for energy consumers.

Around the world, governments are increasingly anxious for a solution to tackle crypto’s environmental impact and strain on energy grids.

Around the world, governments are increasingly anxious for a solution to tackle crypto’s environmental impact and strain on energy grids.

In China, initially home to 65% of global bitcoin production, cryptocurrencies and mining have been completely banned due to the concern around cryptocurrency being used to finance criminal activities and facilitate financial crime. Kazakhstan, which quickly became the world’s second-biggest Bitcoin production base after China’s crypto ban, has seen the negative effects of an unregulated crypto mining industry. In late 2021, the country began experiencing more frequent power blackouts and a jump in peak electricity demand. Soon, the government began cutting off the power supply to mining farms and imposed tax on registered miners, with plans to increase that tax tenfold. Elsewhere, attempts are being made to power mining computers with renewable energy and push the mining process to a greener alternative that could reduce energy demands by over 99%.

In some locations such as Belarus, Russia and Washington, USA, special electricity tariffs have been introduced for crypto miners to make up for the exponentially higher power consumption of mining rigs. Recently, Malaysia’s TNB also proposed a special tariff for crypto miners in order to curb electricity theft for mining, optimise the system’s excess capacity and reduce socialising costs for other energy consumers. This move has received backlash from consumers who propose that crypto mining should be banned outright as its emissions and electronic waste could seriously jeopardise the country’s energy transition goals, and that setting a special tariff for miners does not guarantee an end to energy theft. 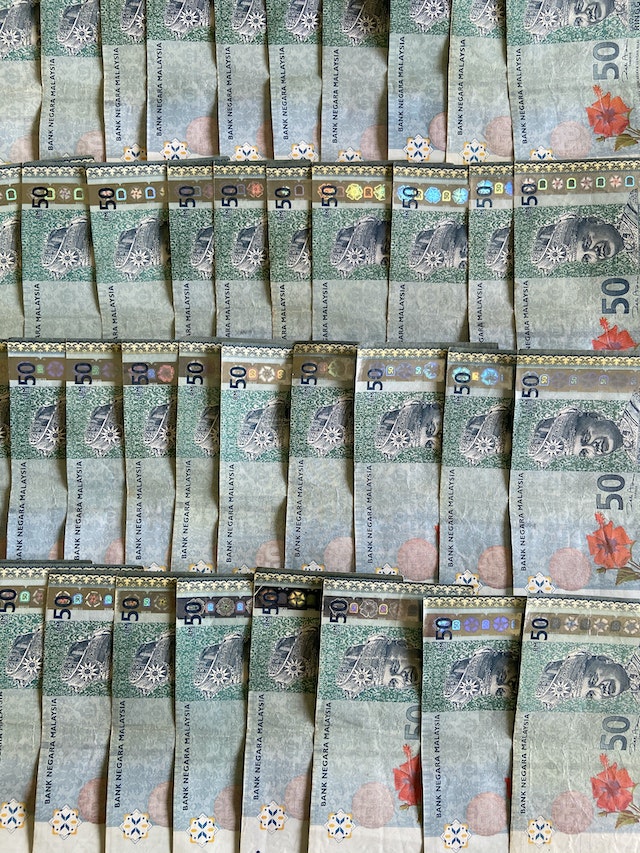 However, although Malaysia’s central bank does not recognise cryptocurrencies as legal tender, the value of cryptocurrency on the global market essentially ensures mining activities continue for the foreseeable future. For those wanting to cash in on the crypto phenomenon, the high energy costs that come with mining may discourage some, but for others, energy theft will become a viable alternative.

To TNB, implementing a special tariff for crypto mining activities could not only curb energy theft and its cascading effects on the energy system, but also provide authorities support for the proper enforcement of mining activities. This could go a long way in regulating excessive energy use and even the disposal or recycling of mining equipment at the end of their life cycle. On top of this, the implementation of a special tariff would legitimise the business of mining, allowing proper taxation on mining profits, and allow utilities to plan for the increased energy consumption of crypto mining, mitigating unexpected costs on the country’s energy system.

Getting Ahead of this Risky Business

Despite the volatility of the market, we may yet see cryptocurrencies become widely accepted payment methods around the world. While we are still far from that reality, investors and crypto miners must be made aware of the negative climate consequences of crypto mining.

Attracting crypto miners to the country may provide Malaysia a golden opportunity to participate in the future digital economy. However, proper governance of crypto mining is crucial to minimise energy losses and avoid socialising costs to other customers. With proper enforcement towards the legalisation and oversight of crypto mining, instead of undermining the energy transition, this technology could very well become part of our sustainable future.